A Maximum Acceptable Income: beyond the symbolic limits Suggesting an Unconditional Autonomy Allowance (UAA – Dotation Inconditonnelle d’Autonomie-) coupled with a Maximum Acceptable Income (MAI – Revenu Maximum Acceptable) is part of the approach, which proposes an economic, social and emancipatory tool to initiate models for sustainable, and desirable societies. With this tool we can avoid the impacts of ever-harsher recessions meant to lead us back to growth. 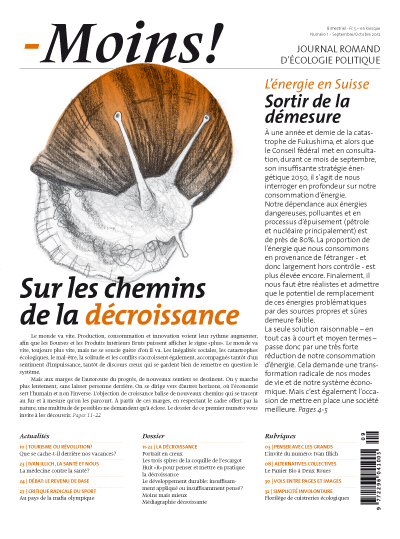 More than a corrective mechanism, these two measures are intended to trigger dialogues and debates on what “living together”, the ways to create “more links” without creating “more goods” mean.

Beyond enabling all of us to live in dignified and serene conditions, the implementation of the UAA coupled with a MAI, this tool enables us to imagine different ways of interacting among ourselves and with nature. It is about finding parameters to adopt more measured behaviours and give our humanity another chance. It addresses the reduction in inequalities since the first aim of Degrowth is to achieve a Degrowth in inequalities. Admittedly, since it is allocated to all without a maximum resources threshold and it is taxable; therefore entirely recoverable by the fiscal system, the UAA reduces inequalities. Above all it could make them acceptable. So, the MIA might look obsolete once the UAA is implemented, because all would enjoy dignified and decent living conditions.

Inequalities would seem less shocking then. It would have a reducing effect since MAI is a mean to reduce the rich people’ unsustainable ecological impact. It is about avoiding scandalous wastages and outrageous practices that cannot be extended to all and, more importantly, that can’t no longer be considered an ideal for the rest of the population to achieve. MAI goes beyond the necessary benefits of social and environmental justice. By minimising the rich people’ lifestyles, considered as the norm and a model for living and happiness to attain, MAI would contribute to decolonise our consumerist imaginary. It is also about breaking away from the perverse effects of this ostentatious rivalry.

Sold by advertising and the medias, this model renders actual inequalities acceptable and creates greater frustrations. It also turns us into never-satisfied compulsive buyers; always running after an illusory happiness based on increasing consumption. MAI is inscribed in the idea that we need to review our attitudes, our life choice and our models. In 2009, in France, in their role of taboos busters and to open up the debate, the Europe-Degrowth candidates proposed a 1-4 ratio between the minimum income (with an equivalent UAA in Euros) and the maximum income. For its part Europe-Ecology-Les-Verts (EELV- Europe-Ecology-The-Greens) proposed a 1-30 ratio and the Party de Gauche (Left Party) a 1-20 ratio.

This proposal might seem extreme in a society where cash is king. This is why it is important to remind people that this kind of measures has before existed; namely after the 1929 crisis and during WWII in the USA. In 1942, Franklin Delano Roosevelt declared: “No American citizen can have a yearly income (after tax) superior to $ 25 000”. To advocate for a maximum income is not synonymous with wanting “to beat up the rich”. It is neither populist towards the most disadvantaged people. Even if it is a strong signal for our strong desire for change, wanting a maximum income, is, above all, wanting a different society where the maximum is not only symbolic.

To advocate for a maximum income is a way to initiate a Degrowth project.

3 réponses à A Maximum Acceptable Income: beyond the symbolic limits