Succesful and fruitful Degrowth workshop in Budapest – The Right Great Transformation is underway!

After Ljubljana in 2013, Zagreb in March, Sofia in May and Leipzig in September 2014, a two-day long regional workshop on Degrowth in postsocialist countries took place in Budapest on the 24-25 January 2015. 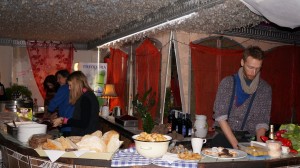 The lunch was made with local food sourced directly from the organic farm in Zsambok. Many thanks to the self-managed kitchen team who prepared delicious beetroot, onion and carrot salads, körozöt and potato stew. Also thanks to all the participants and all the products shared.

We concluded this first day with an open discussion about public debt and extractivism with Nicolas Sesiron from the Committee for the Abolition of Third World Debt.

Finally, before a convivial party contemplating the falling snow and the Buda hills,  Miklos Antal gave a talk about the physical limits to growth, explaining why sufficiently fast decoupling is very unlikely. Then Vincent Liegey presented the cultural limits by questioning why the quest for more is far away from a meaningful life. Convivial discussions on how to reappropriate hope and conviviality carried on until late night. 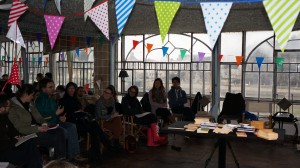 The second day was spent focusing on concrete alternatives and self-organisation for future projects. We were first welcomed by Edina of the Szimpla backyard small producers’ market who presented the cultural and community development activities surrounding the weekly food market. Afterwards Logan from the organic farm of Zsambok explained why direct market of this nature are important to, on one hand find opportunities to directly sell the products, and on the other hand to implement trustful and transparent relationships between the consumers and the producers.

Also in the warm and special atmosphere of the market, we had a session on the application to host the next Degrowth Conference in Budapest with a regional organisation. After lunch in the market, we departed on foot, on a sightseeing walk in wonderful Budapest, to Noha Studio, where Adrien presented all the workshops and activities happening there. He also presented Cyclonomia’s activities, Do it Yourself bike and low tech shop, where we had a meeting about upcoming events and projects we could implement.

Also people from diverse backgrounds could share their different experiences, in particular connected to local alternatives.
Again thanks to all the participants and all the people who contributed to this succesful organisation. In particular, thanks to Adrien, Orsi, Laura, Dimas, Logan, Edina, Peter, Adela, Dan, Tamara, Miklos, Mladen, Ajda, Jutka, Lidija, Gabi, Szabina, Tone, Blanka, Christina and a lot of other for their precious help and contributions. Everything was organised based on reciprocity economy principles. We received free donations which help us to balance the budget in supporting local partners.

In Budapest, Karl Polanyi’s town, we could enjoy a new Great Transformation which is underway… But that one, is based on Degrowth. That’s one is the right one.