« A Degrowth Project », why this book? 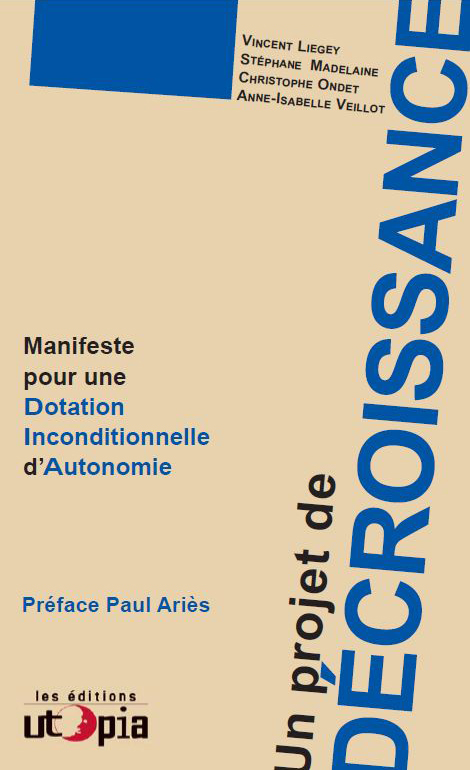 Over the last few years, concepts of an unconditional basic income and a maximum acceptable income, the extension of free usage spheres, taxing misuse, fluid local currencies, open re-localisation and transition, as well as issues of political strategies and organisation of the movement, have been, at the centre of the discussions and debates within all the groups associated with Degrowth.

Over the last few months some topics have been developed in depth; mainly the political approach vis à vis the debt and monetary creation, on the post-oil era, the means to do away with capitalism and productivism or the way to re-politicise society. Thanks to Growth Objectors, for the most part, these discussions resulted in the Unconditional Autonomy Allowance (UAA), coupled with a Maximum Acceptable Income, that have become the umbrella for economic and social measures imbued with the potential to trigger virtuous circles towards a sustainable, serene and convivial Degrowth.

With this manifesto, we are hoping to start a constructive debate, so that this transition project can be discussed, lived and incrementally adapted here and there. Without being the definitive tool, this UAA is a lever to get us out of the impasse growth society brings us ever closer from.