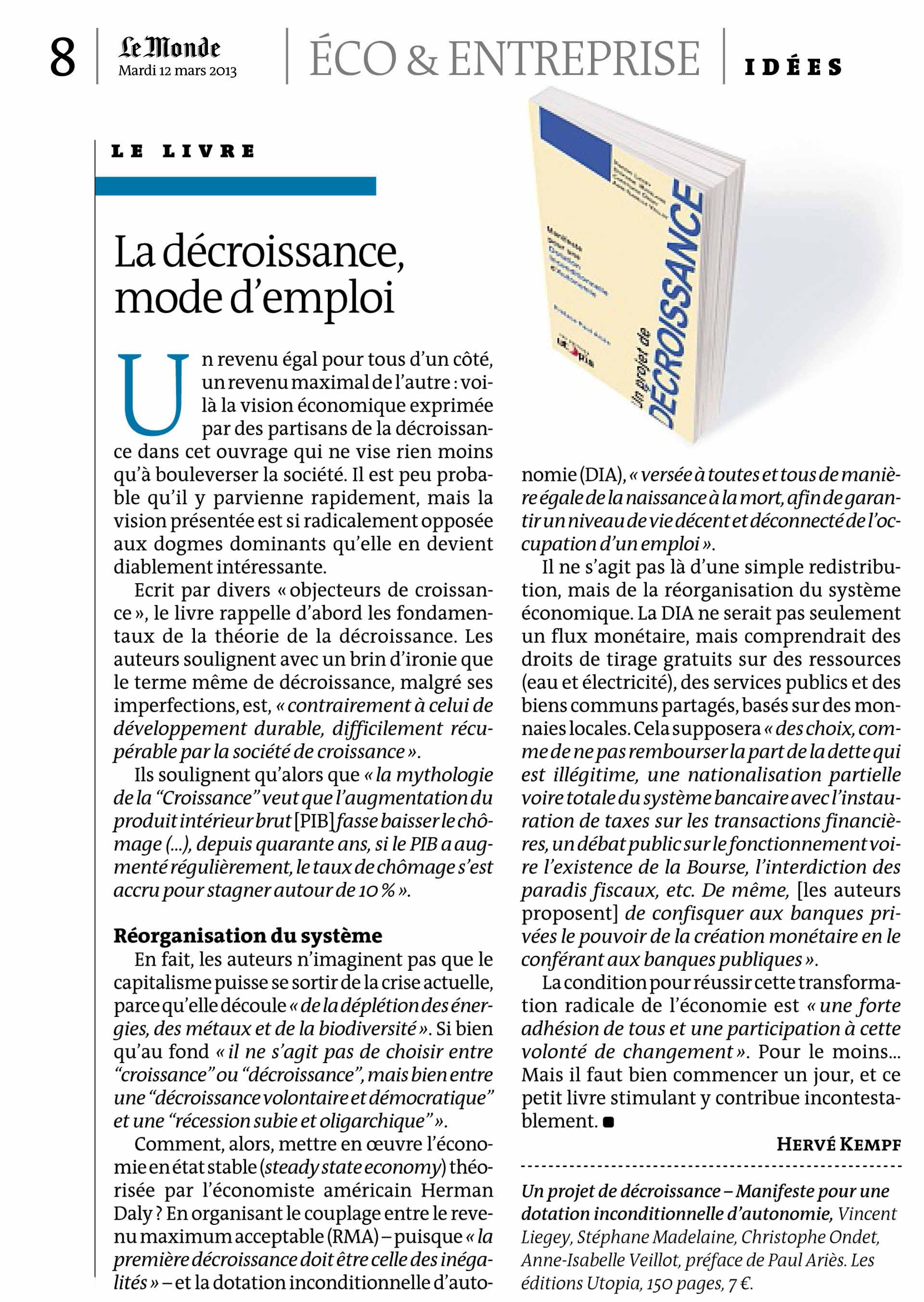 An equal income on the one hand and a maximum income on the other: this is the economic vision offered by Degrowth supporters in this book which is intended on shaking society. It is unlikely that it will succeed in the near future, but the vision is so radically opposed to the dominant dogmas that it becomes rather interesting.

Written by diverse “growth objectors”, the book begins by reminding us of the basic tenets of the Degrowth theory. With a touch of irony, the authors that the very term “Degrowth”, despite its imperfections, ”does not lend itself, unlike sustainable development, to be appropriated by growth society”.

They insist that despite the fact “that the mythology of “growth” stipulates that an increase in GDP reduces unemployment (…), over the last forty years, if the GDP has grown incrementally, the unemployment rate has increased and stabilised at around 10%”.

In fact, the authors do not believe that capitalism can get out of the crisis, the result of “ energy, iron ores and biodiversity depletion”. The situation is so dire that “ it is not a matter of choosing between “growth” and “degrowth” but between a”voluntary and democratic degrowth” and an “endured oligarchic recession”.

Then, how is it possible to implement the economist Herman Daly’s Steady State Economy? By coupling a maximum acceptable income (RMA: Revenu Maximum Acceptable), since “the first Degrowth must be the degrowth in inequalities”,with an Unconditional Autonomy Allowance (UAA) (DIA: Dotation Inconditionnelle d’ Autonomie), “paid equally to all from birth to death, in order to guarantee a decent lifestyle, disconnected from holding a job”.

It is not a mere redistribution, but an overhaul of the entire economic system. The UAA would not only be a monetary allowance, but it would also entail free drawing rights on resources (water and electricity), public services and shared common goods, based on local currencies.

This implies that “choices such as the non-repayment of the illegitimate portion of the debt, a partial or total nationalisation of the banking system with the implementation of financial transaction taxes, a public debate on the functioning the Share Market, its existence even, a ban on fiscal paradises, etc. The authors propose “ to take money creation away form the private banks and transferring it to public banks”.

The necessary condition to achieve this radical economic transformation is “ a massive adhesion and participation in this desire for change”. No less… But we must start somewhere, and, undoubtedly this book contributes to it.